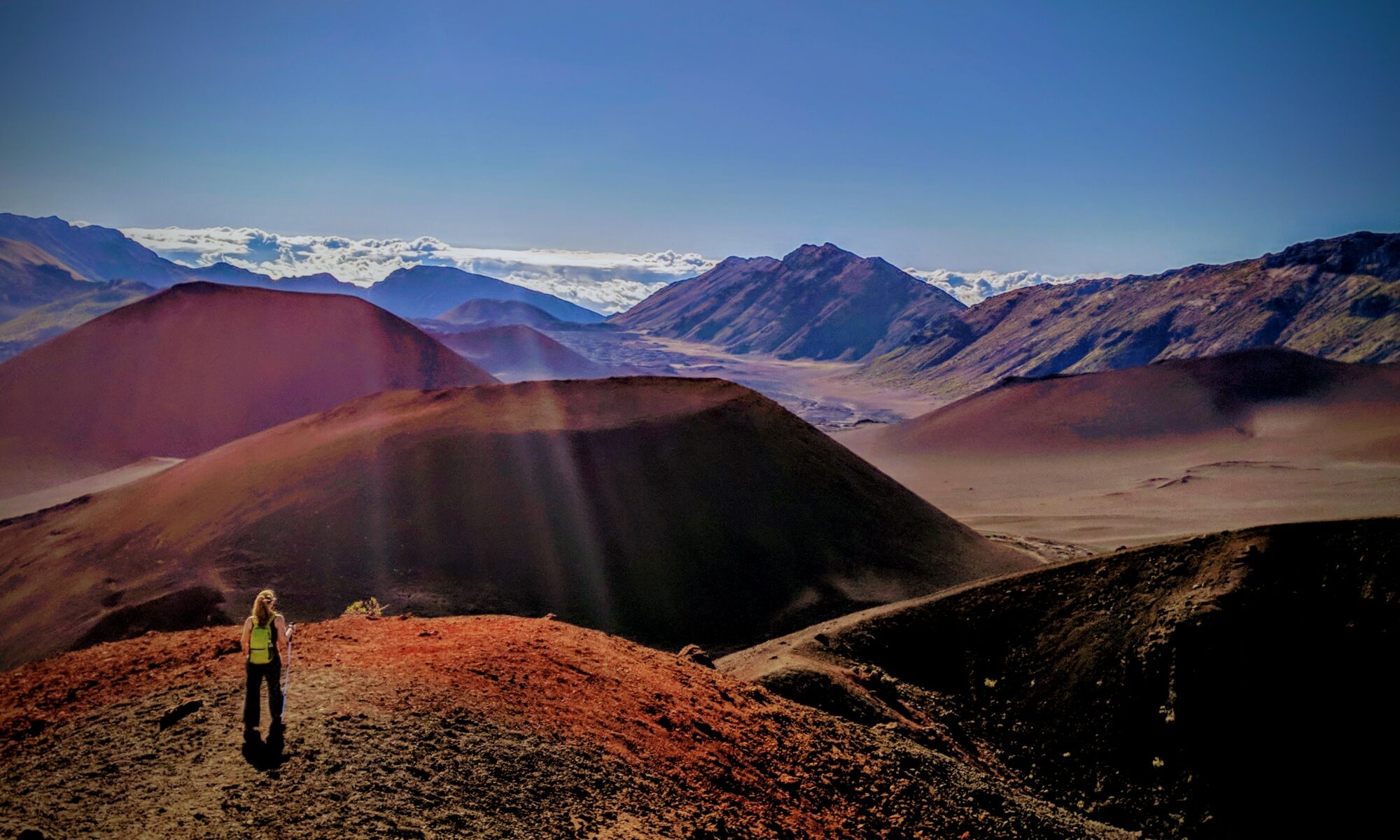 Up at 2:30 a.m. Strike that — I’d actually been up since about 11 p.m. thanks to a mystery alarm in our Paia Town rental, and I’d tossed and turned until finally getting up at 2:30. Kat, on the other hand, was sound asleep when I nudged her at about 3 a.m.

“Hey dear, time to go.” At least that’s what I think I said. I may have just muttered a handful of nonsensical words in my sleep-deprived stupor, but whatever I said woke her up.

I think you said “Hodor,” but maybe I was having a Game of Thrones dream again.

She shook out the cobwebs, we grabbed a couple coldbrew coffees and struck out for Haleakala National Park with plans that were twofold: 1) Watch the sun rise from a perch high above the clouds, and 2) hike down into the massive crater.

Early Bird Gets the Rail

I’d read in a travel guide that it’s best to get to the top no later than 4:30 a.m., and the guide was spot on. As we pulled into the parking lot, several tour buses soon followed. I’d heard that a certain viewing rail was the prime location, so Kat and I quickly made our ways to the platform, which was quickly shoulder-to-shoulder.

A few minutes later, two women arrived to find there were no spots left along the rail. “Two in the morning,” one of them said, “I got up at two in the morning for the second row.”

I felt bad for them.

You didn’t give up your spot though.

No, but it’s the thought that counts.

We waited, the sun came up, we oohed and aahed, shot lots of pictures, froze our butts off … and swore we’d never do it again. It’s one of those things you just have to do.

It was actually kind of balmy compared to the weather we were having back home.

The second part of our morning was what we were really looking forward to, and that was hiking down into the “crater” (it’s actually not a crater, but the explanation why is not terribly exciting). The Keonehe’ehe’e Trail, more commonly known by its English translation, Sliding Sands Trail, is aptly named because you really do tend to slide around as you trek down the cinder pathways to the crater floor. I think they settled on Sliding Sands because we mainlanders would totally murder the pronunciation of Keonehe’ehe’e, but just know that they are one and the same .

Waypoint #1: Careful! This trail junction to the first cinder cone is closed.

Descent Into The House of the Sun

The trail begins at the southwest end of the visitors center parking lot (you’ll see a place for loading horses). If you haven’t already grabbed a trail map, there should be a few of them in a box at the nearby trailhead kiosk. As trails go, this one is relatively easy to navigate since you can see everything ahead of you for miles, but it’s always a good idea to have a map anyway (you can also download the map below).

You didn’t navigate it so well.

I’m going to get to that part.

There are several shortcuts the park asks you to disregard along the way. We didn’t learn until later that, despite our best intentions, we hiked a trail that that is no longer on the map. But more on that later.

We had planned out our route in advance and knew that we did not want to try an eleven mile thru-hike from the visitors center to the Halemau’u trailhead after getting up as early as we did. The idea of trying to hitchhike back to our car didn’t appeal to us either. We decided that we’d be doing pretty well for ourselves if we hiked 3.9 miles to the intersection of the unnamed trail that heads northeast to the Halali’i cinder cone.

Hiking downhill for such a long time can be misleading – let me just put that out there.

We realized that each step we took down into the crater would be twice as grueling coming back up, but we couldn’t help ourselves. The views of Haleakala are beautifully disorienting, and the landscape seems impossible as you look to the horizon and see that you are somehow walking above an ocean of clouds.

We had left enough room in our backpacks to shed our winter coats and sweatshirts, and it didn’t take long for us to get rid of them. What began as a 40-degree morning quickly became a t-shirt kind of day. The sun heats this place up in a hurry!

Confident that we had reached the turn to Halali’i and with plenty of energy in the tank, we decided to make the trek to the cinder cone and explore. It wasn’t until much later that we realized we had made a miscalculation. Instead of being at the junction for Halali’i, we had in actuality set a course for the Ka Lua O Ka ‘O’o cinder cone.

Hey, I was just following you. Don’t bring me into this.

We’re probably not the first ones to make this mistake. According to Bob Burd’s Trip Reports in a post dated December 13, 2016, he writes that “it seems that since I first hiked [the trail] in 1991, the Park Service has removed the trail junction signs and closed the original route though it is obviously still used.” He also mentioned that, as of 2016, the trail still appeared in the park brochure despite the closure. After a bit more digging, I learned that the park did in fact close the trail at some point between 2016 and 2017. It’s a shame to have to close the trail, but we’re pretty mindful of preservation efforts and feel kind of bad that we pulled a no-no.

Another map from 2005 provides the distance from the Sliding Sands trailhead to Ka Lua O Ka ‘O’o as 2.6 miles, so we fell far short of the of the trail junction to Halali’i. Uh, did I mention this place was disorienting? Maybe it was the 10,000-foot altitude messing with me, and I’m not too ashamed to admit we probably would have done a better job if Kat had done the navigating.

Ding, ding, ding! Tell him what he wins, Don.

I reached out to Haleakala National Park to get an official statement regarding the trail’s closure to help spread the word. Park Ranger Betsy Black graciously responded:

‘Ka Lua O Ka ‘O’o is in fact closed. [Hiking the trail] was causing severe and irreparable damage to our nesting petrel colonies and some archaeological sites located in the vicinity. The petrels, known as ‘ua’u, only burrow atop Haleakala and dig their burrows into our erosional scree.’

‘Consequently, their burrows are very fragile and are easily collapsed when hikers walk even within a hundred feet of the nesting areas and trigger small rock slides. The Hawaiian petrel is endangered and can only lay one egg each year so it is especially important for their stewardship to limit intrusion into fragile areas.’

Poles Are Your Friends

We began the long slow return to the top. We have never been ones to use hiking poles, but we purchased some specifically for our trip to Hawaii. It turned out to be a great decision, because when you’re climbing a long distance and it is ALL uphill, your legs will thank you for any additional support you can give them.

I’ll give you that one – they really did make it better.

Honestly, I always thought hiking poles looked kind of silly, but this trip made me a believer. Besides, who cares what you look like when you’re just out for a walk in the middle of nowhere? Now, the guys who fight with them around my local city park, well, something ain’t right there.

That’s the Society for Creative Anachronism, dear, and those are fake swords, not hiking poles.

Anyway, we’re going to give this thing a shot where we promote something on Amazon, and if you buy it we get a small commission (at no added cost to you). These are the exact poles we purchased (a pair for each of us). The price was reasonable, and we’ve been really happy with them — durable yet light. And not too dorky, right? Hello 40 cents for me!

Note: Not intended for swordplay by weird park dudes.

Haleakala National Park was without a doubt one of my top five all-time hikes, and I can’t wait to go back some day and try something more adventurous like a thru-hike to Halemau’u trailhead, or at least make it to our originally-intended destination. There is so much to see, and you’re only limited by how far your bones will take you (and pesky mystery alarms that keep you up all night).

PLEASE HELP US OUT!


If you enjoyed this free article on hikingillustrated.com, please consider
purchasing anything on Amazon via our affiliate link at no extra cost to you.

Purchase anything on Amazon

The One Destination You Must See On the Road to Hana

The Perfect Day On Maui’s East Coast: Hana to Kipahulu